Finca Monteblanco, located high along the winding mountain roads of Vereda La Tocora in the San Adolfo municipality above Pitalito, is a family farm managed by Rodrigo Sanchez Valencia in the tradition of coffee cultivation that began with his grandfather. Monteblanco’s 18 hectares sit on the crest of a hill, with the wetmill and drying facilities at the top of the farm and slopes of coffee planted below.

In 2002, Rodrigo participated in a local program teaching local children of coffee producers to cup. Before that, he and his family had never considered coffee in terms of cup profile. By learning to differentiate profiles, he and his father and grandfather were able to make the connections between the farming techniques they applied and coffee’s attributes in the cup.

At this time, Rodrigo also began to learn about cupping competitions that evaluate the best lots from farms in a region. He noticed that farms would win one year and then never again, so he decided to investigate how to produce quality coffee consistently. This led him to explore the trees planted on Monteblanco, where he discovered various varieties his grandfather had planted in the 1980’s.

Rodrigo is proud that he, his wife Claudia Samboni, farm manager Don Gerardo, and the team that works in the fields and at the mill have reached the goal of achieving consistent quality. Each harvest, Finca Monteblanco produces microlots that serve as competition coffees around the world, but the farm also consistently produces containers of delicious coffees that appear year-round on café menus and retail shelves. By applying an ethic of rigorous monitoring, planning, and management at each stage of production and processing, all coffees from Monteblanco showcase their full potential.

Harvesting and processing on Monteblanco have had to evolve with the times, adapting to a changing climate that yields harvest dispersed through ten months of the year rather than in a concentrated peak. Coffees from Monteblanco are milled and prepared for export at the new, state of the art Aromas del Sur drymill in Pitalito.

In addition to the varieties most common in Colombia, Rodrigo found there were trees he had not noticed before, trees with different characteristics, including broad leaves that looked like Gesha. In the cup, the coffee he harvested also tasted like those of Gesha. This was the beginning of Pink Bourbon lot separation. Rodrigo learned that his grandfather had bought those seedlings in San Adolfo during the early 80’s during a leaf rust attack of la roya when he had to replace a portion of the farm’s trees.

In San Adolfo and Palestina, the Colombian Coffee Growers Federation ran an experimental farm in the 50’s and 60’s planted with 500 varieties, so Rodrigo and his grandfather think the trees probably originated from that farm. In 2014, Rodrigo planted three hectares of Monteblanco with Pink Bourbon and was delighted with its adaptability, productivity, and resistance to leaf rust. The cherries ripen to a rosy pink/orange color, giving name to this unique coffee variety.

As cherries are harvested, the Aromas del Sur team measures the degrees Brix to determine the best method of processing. Coffees with 20-23 degrees Brix are selected for Natural processing. Float sorting removes defective cherries and the remaining cherries are placed in the solar dryer for five days before being transferred to raised beds in the shade for the final 22 days of drying. The moisture content is monitored throughout the process until it reaches 10.5-11% and cherries are turned to avoid the formation of any off flavors. This lot was dry milled at the Aromas del Sur facility in Pitalito. 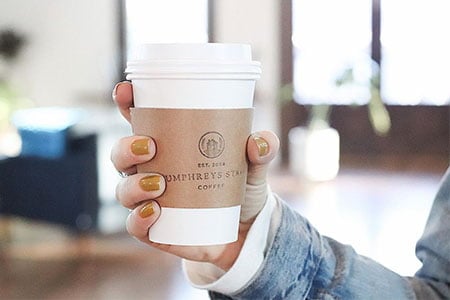 Get your Humphreys Street fix without leaving your car, just in time for the cold months ahead. We’ll bring your drink to you when you order ahead and let us know you’ve arrived.

Sign up for our newsletter to receive 10% off your first online order!